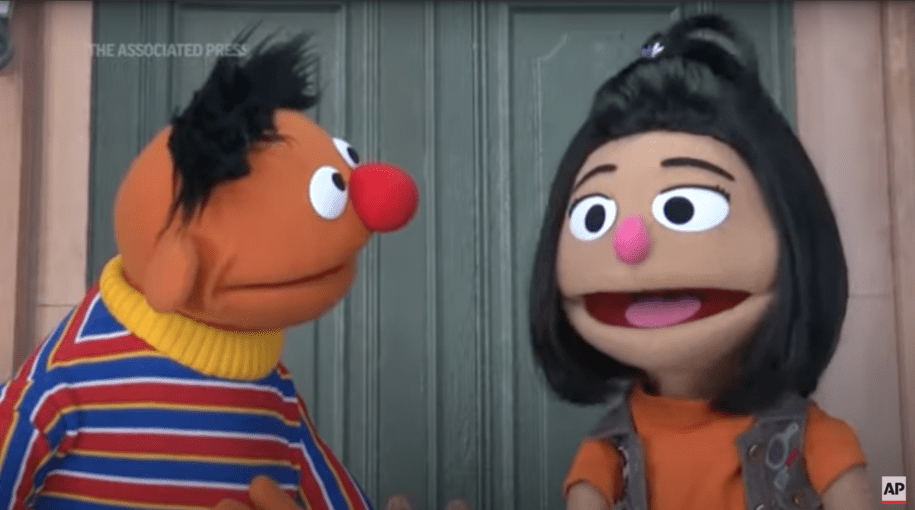 In addition to being the first Asian American muppet, Ji-Young, in an interview with the Associated Press, shared that her name has special meaning.

“In Korean, traditionally the two syllables, they each mean something different. And Ji means, like, smart or wise. And Young means, like, brave or courageous and strong,” she said. “But we were looking it up and guess what? Ji also means sesame.”

She is Korean American and has two passions: rocking out on her electric guitar and skateboarding. She’ll be formally introduced in a special that drops on Thanksgiving. pic.twitter.com/mZDgwTZJK3

According to Sesame Workshop, this year’s Thanksgiving special celebrates “the rich diversity of Asian and Pacific Islander (API) communities as part of the organization’s ongoing racial justice initiative.” It was “created to support families of all backgrounds through ongoing conversations about race” and will offer the opportunity to discuss anti-Asian racism.

“It’s a powerful thing when kids see people like themselves represented on screen and in stories—it supports them as they figure out who they are and who they want to be,” long-time cast member and co-director of “See Us Coming Together” Alan Muraokasaid in a press release. “We can’t wait for families to get to know Ji-Young—in this special and in future seasons of Sesame Street—and celebrate some of the Asian and Pacific Islander people in our neighborhood!”

Muraokasaid also noted the importance of the timing of the special, as it comes amid a rise in attacks against Asian Americans. According to TODAY, in an offscreen incident, another child is seen telling Ji-Young to “go home.” This incident serves as an example of discrimination AAPI individuals face. Sesame Workshop shows how Ji-Young handles the situation by depicting her reaching out to friends and grown-ups who remind her she’s exactly where she belongs.

“What’s really cool about Sesame Street is that, no matter what you look like, or how you play, or where you come from, you belong, and that’s really cool,” Ji-Young said in an interview on TODAY. “I feel very welcome, and it’s the best neighborhood in the whole world.

I am so excited, thrilled and honored to announce that I’ll be appearing on @sesamestreet this Thanksgiving day, welcoming its newest resident, a 7-year-old Korean-American girl named Ji-Young! It’s crazy and surreal to even write these words but as a young immigrant boy… pic.twitter.com/CA1yFtm1VW

Although Koren American, Ji-Young’s character is meant to represent multiple Asian identities. Her existence follows a series of recent events including a rise in Asian American hate. Speaking to the Associated Press, Kathleen Kim, who voices Ji-Young, said it was crucial that Ji-Young not be “generically pan-Asian.”

“Because that’s something that all Asian Americans have experienced. They kind of want to lump us into this monolithic ‘Asian,’” Kim said. “So it was very important that she was specifically Korean American, not just like, generically Korean, but she was born here.”

“I remember like the Atlanta shootings and how terrifying that was for me,” Kim continued. “My one hope, obviously, is to actually help teach what racism is, help teach kids to be able to recognize it and then speak out against it. But then my other hope for Ji-Young is that she just normalizes seeing different kinds of looking kids on TV.”

​Sesame Workshop has continued to play its part in keeping parents and young children aware of social issues by creating programming on a variety of topics including town halls on racism and episodes including refugees and other displaced children as muppets.

“Today, we uphold that mission by empowering children and families of all races, ethnicities, and cultures to value their unique identities,” Sesame Workshop’s executive vice president of creative and production, Kay Wilson Stallings told TODAY, when speaking of the company’s mission.

Research has proven that the media not only influences the view of children but how they perceive themselves.

“This new special continues Sesame Street’s proud legacy of representation with an engaging story that encourages empathy and acceptance and uplifts Asian and Pacific Islander communities.”

“See Us Coming Together: A Sesame Street Special” will debut on Thanksgiving Day, Thursday, Nov. 25.

Watch Ji-Young’s special song with her and Elmo’s band below: